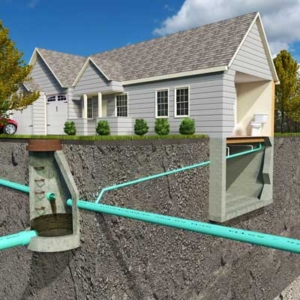 When municipal sanitary sewer service is not available, a septic system is needed. NexGen offers choices in what kind of system you may use, from the type of tank to the type of leach field. Choices can be based on what type of septic system you may want to have, such as an aerobic tank or leach field chambers, and in other situations, some options may be chosen because of water table height or unsuitability of soil on the site. Whatever the situation, we will use innovative approaches to engineering to find the perfect solution for your California septic system design.

One approach to water treatment that can be used is the conventional septic tank. This method uses anaerobic bacteria (bacteria that do not need air) to break down the solids and other waste that enters the tank. As the waste is broken down by the natural bacteria, it becomes wastewater. A conventional septic tank has three levels: the bottom layer that has heavy solids, the middle layer that is filled with wastewater, or effluent, that is treated and flows into the leach field, and the top layer with lighter solids and grease that is also broken down by anaerobic bacteria. This system works on gravity and provides only primary treatment.

There are also alternative septic system designs. These solutions produce less environmental waste than conventional systems. NexGen has a solution called an aerobic tank. In this system, waste flows into the tank, and air is forced into the chamber with the waste by pumps. The bacteria present in the air (aerobic bacteria) break down the solids. They are further broken down than they are in a conventional system. Effluent flows out and into the leach field. This level of treatment is considered secondary treatment, and compared to a conventional septic tank, it’s faster.

Using Sand as a Filter in Septic System Design 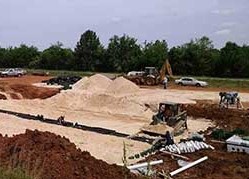 Another possibility in alternative septic systems is the mound septic system design. This is typically used when the water table is close to the surface of the ground or if the soil is inappropriate for a typical leach field. A mound of sand is built by NexGen with earth-moving equipment in the location of the leach field. Electrical pumps force wastewater into the mound. Once in the sand mound, the wastewater filters down, leaving impurities behind. This creates more distance between the effluent and the groundwater and allows the effluent to purify to an acceptable level before it reaches the water table.

There are also choices in leach fields today. There is always the conventional option of pipes in the soil, which has been used for so long. With new technology in leach field chambers, NexGen is optimizing water resources through water recycling. In some areas these are able to be used and simplify the leach field construction process. Both work with gravity.

A conventional leach field is simple. A line is run from the septic tank into a network of pipes that lie in gravel-lined trenches in the ground. Effluent flows into these pipes. The pipes have small holes drilled in their sides and bottoms. There are helpful bacteria in the pipes. As the effluent slowly seeps out of these pipes and down into the ground, it is cleaned. Impurities are trapped in the soil beneath the pipes as the water flows away. The treated water is absorbed by the roots of plants, is evaporated by the sun above, or moves down to join the groundwater. 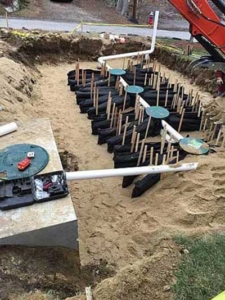 s. Systems such as the Advanced Enviro-Septic (AES) Treatment System clean 99% of contaminants out of wastewater. NexGen is an AES Dealer. They hold more wastewater and make the footprint of the leach field smaller. Because no gravel is needed, earth-moving equipment is not necessary. They are low maintenance, don’t require pumps or other mechanical devices, or additives.

Much like a conventional leach field, wastewater flows into the chambers. The short, wide, flexible chambers have louvers on their sides (like the holes in the pipes) that the wastewater seeps out of. The chambers are surrounded by geotextile material. In this septic system design, there are beneficial bacteria in the chambers, as there are in the conventional pipes, only many, many more.

With septic system design, a leach field must be designed as part of the system. That leach field design factors in things like usage of a building, be it commercial or residential, number of occupants in the building, and a perc test. A perc, or percolation test, is when a hole is dug to a specified depth where the water table is at least two feet below the ground’s surface. Water is poured into the hole and the rate at which the water drops back down to its original level is its percolation rate.

A leach field’s size is directly proportional to the amount of wastewater that the home or business produces. It is also directly inversely proportional to how porous the soil is at the site of the leach field. A pump may be used with a leach field, such as in the case of a sand mound septic system design. To even out the flow to the field, siphons and other such devices are occasionally used. In these cases, the leach field lasts longer because premature clogging and bio-clogging are prevented in the system.

When a septic field fails, there is no choice but to dig a new one. NexGen is there with a better, up-to-date design, getting you back on top. Likewise, when you need a new, more effective septic tank, contact us for your septic system designs in California.

We leverage the cross-industry experience, skills and knowledge of our team to fuel creativity and ingenuity.

Partner with our team today on your project and we’ll help you every step of the way. Let’s design a better world together.

Make a mark in the engineering world with a highly-experienced and passionate team. Let’s make an impact on the world starting with our own communities.